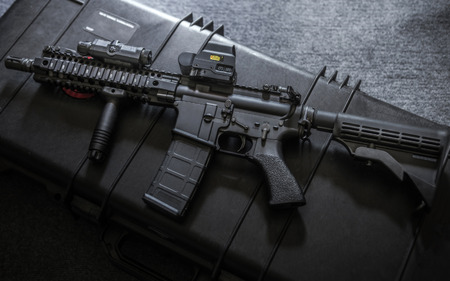 It’s horrible.  Every day it seems there is another mass shooting by some psychopath whom has access to firearms.  It’s simply horrible.

But, one must ask themselves, how do these people get access to firearms?  How do they pass a NICS background check?  How and why does the government let these people slip through the cracks?

It’s almost scripted: Madman acquires a firearm legally.  Finds a gun free zone.  Wreaks havoc at supersonic speeds.   Gets killed or arrested.  The media pounce, mindful to never let a crisis go to waste to push an agenda.  The left cry for gun control.  The right hunker down with the NRA to protect 2nd amendment rights. It’s like a bad late-night infomercial that is on constant repeat.

Meanwhile…no one ever bats an eye to one simple grim reality:  So many times the FBI were privy to practically all of these people in a strong period before these acts of terrorism occur yet somehow, someway, they weren’t flagged in NICS (which is ran by the FBI) and they were allowed to legally purchase a tool to carry out the evil and cowardly task these savages had plans to put forth.  It’s sick.  It’s horrendous….but nonetheless very true.

One has to wonder, if the FBI and the US government want to protect the American people or use the tragedies set forth as an effort to eventually disarm the entire American Populous.

Here at firearmsdebate.com we pride ourselves on active discussions for active solutions to issues facing gun rights in America and now more than ever this discussion needs to happen.  So, the question:  Does the FBI willfully let these tragedies occur in order to further an even larger agenda or are they simply inept?  We will let you decide. Meanwhile, here are some disturbing facts about a few of the past acts of terrorism that the FBI could have prevented, but simply didn’t.

So, one must ask why didn’t the FBI act on these madmen?  Why weren’t they flagged in NICS?  I would say that before the American public screams for gun control and the degradation and trampling of the rights of law abiding citizens we, as a nation, should hold our own agencies accountable to actually prevent these acts of terror from occurring.  All of the above could have, had the FBI simply done their job and flagged these savage cowards in NICS.